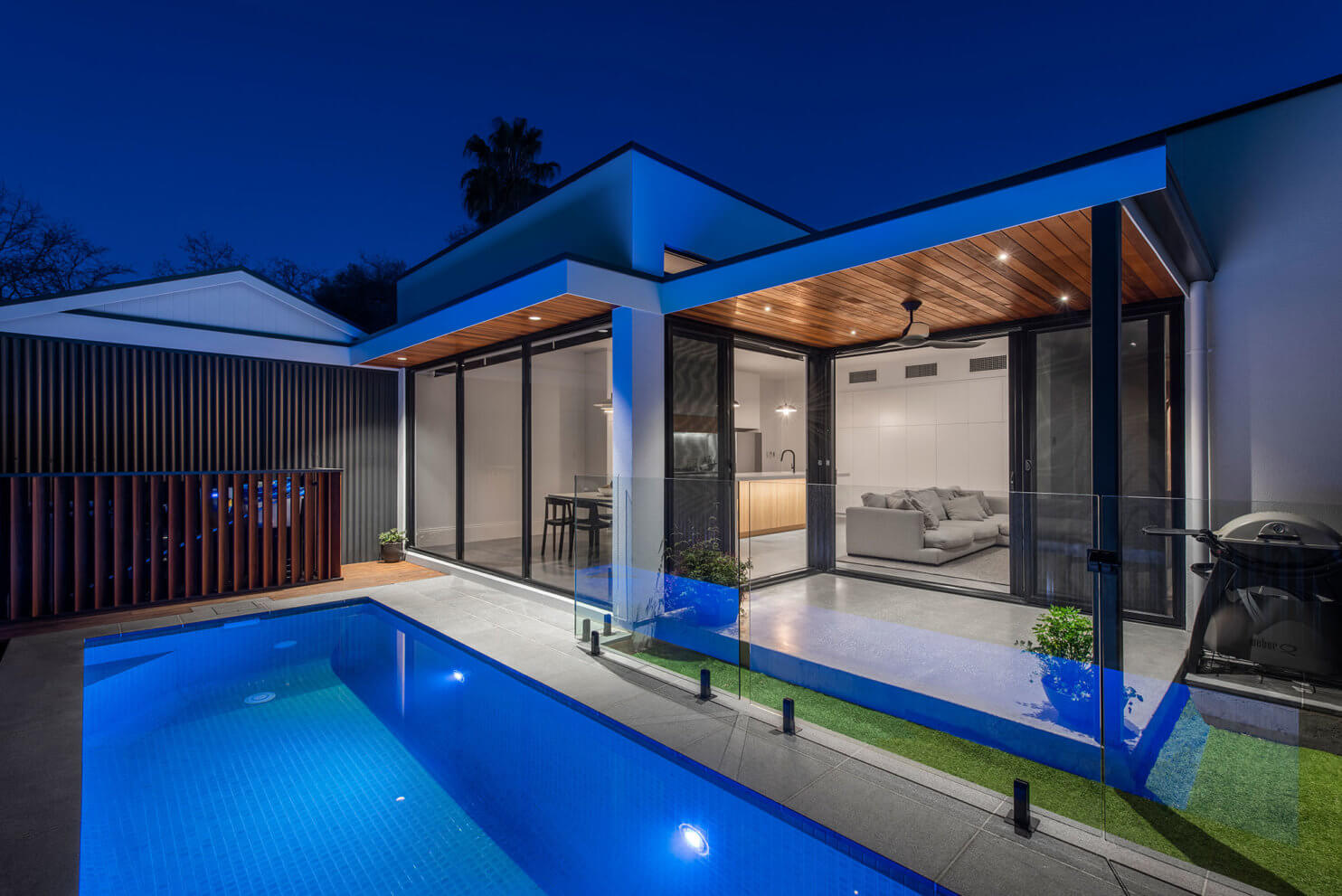 The brief was to renovate the clients’ existing cottage and extend the property’s footprint to add a large, light-filled open plan living space that opened out to a courtyard and pool. The circa 1900s cottage was sympathetically renovated, with the 1980s lean-to removed to make way for the extension. The heritage part of the home consists of a master bedroom, two further bedrooms and the main hallway. The rooms to the existing cottage were fitted with custom-made skirtings installed by our in-house team to match the existing. Cornices and ceiling roses were custom-made to match the existing cottage. Floor-to-ceiling joinery was added in the kitchen/ living area, while all spaces were freshly painted. Finally, the existing baltic pine flooring was extensively repaired, lightly sanded and polished with a white lime wash.

To support the transition from the old part of the house to the new extension, recycled red bricks were reclaimed from the old fireplace and walls, cleaned and laid to create a hallway arch that opens into the new space. The new extension is made up of an open plan living space to the rear of the property incorporating a kitchen, dining space and living space, as well as a study nook, a family bathroom, and a laundry/ mudroom.

The kitchen and mudroom both feature two-pack joinery in matte white and silestone benchtops. In the kitchen, the island bench is crafted from Polytec natural oak, matte white two-pack joinery and a silestone benchtop. A mosaic gloss white Kit Kat splashback tile adds a fresh touch, while the sink and mixer tap in matte black bring a contemporary flavour. The open plan part of the extension features polished Imagecrete concrete in Barossa Aggregate.

The family bathroom is tastefully appointed and features brushed nickel sanitary ware, complemented by Rome cement light grey floor and wall tiles. Mosaic matte white penny round tiles were laid above the shower ledge, while a Velux skylight adds light to the space, coupled with round downlights throughout.

The open plan living space opens out to the alfresco/ pool area and features a cosy Escea gas fireplace. It is surrounded by two pack matte white joinery and floating shelves. Again, old and new marry sensitively with an old red brick feature wall sitting adjacent to the study nook. Outside, the pool features natural stone pool tiles and coping. A deck was crafted by our in-house team from a mixture of reclaimed Australian hardwoods, while the alfresco ceiling was beautifully clad in western red cedar.

Please complete the form below to request a consultation and provide any additional details as part of your message.
We'll be back in touch as soon as possible.